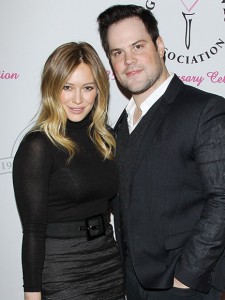 After two years, Hilary Duff’s divorce has finally wrapped up. Hilary Duff, aged 28, married former NHL player Mike Comrie, aged 35, in August of 2010. However, four years of marriage later, the couple separated in 2014. Ms. Duff would formally file for divorce in February of 2015. With the start of this New Year, came the finale of the couple’s divorce.

Ms. Duff and Mr. Comrie had signed a pre-nuptial agreement before their marriage in 2010. The terms are not certain, but it most likely has had a significant bearing on the terms of their divorce.

Ms. Duff retains ownership of the couple’s Beverly Hill Mansion (as well as any other shared property). However, she will have to pay Mr. Comrie $2,408,786 dollars for his equity share of the mansion. Mr. Comrie will also be keeping his Mercedes G-Class SUV, his Bentley coupe, and some assorted jewelry. As for the couple’s child, Luca, the parents will have joint physical custody with a mutually agreed upon parenting time schedule. The parents will equally divide any costs related to their child. There are no alimony payments.